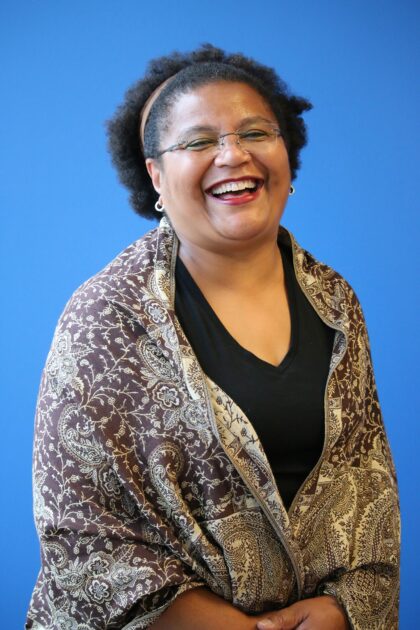 Viola Abbitt has been a lifelong resident of New York State. She grew up in the Hudson River Valley in the towns of Tarrytown and Sleepy Hollow, and currently lives in Malta, which is between Saratoga Springs and the capital of Albany.

Viola was granted Preliminary Fellowship in September of 2019, and she is currently serving as the half-time contract minister of two congregations in New York State, the First Unitarian Society of Westchester and the Unitarian Universalist Fellowship of Poughkeepsie. In June of 2019, Viola finished serving a two-year part-time ministerial internship at the Unitarian Universalist Society of Greater Springfield in Massachusetts. Immediately prior to that, she served as an intern chaplain at the Albany Medical Center. Before that, for ten years, she worked as the Director of the Office of the Ombudsman for the New York State Office of Children and Family Services. There Viola supervised a staff whose core mission was to protect and promote the legal rights of youth in the juvenile justice system. She considers that position the most rewarding she has ever held, prior fulfilling her call to ministry.

Viola was previously employed by the New York State Attorney General’s Office, first as an Assistant Attorney General in New York City, and later as the Deputy Bureau Chief for the upstate division of the Criminal Prosecutions Bureau. There she was involved in the prosecution of cases involving securities and tax fraud, environmental crimes and public corruption. At the beginning of her legal career, Viola served as an Assistant District Attorney in Bronx County, where she prosecuted street crimes, and later as Deputy Counsel for the Borough President in the Bronx. Viola’s interest in a law career arose from her sincere commitment to justice and fairness, and started when, as a teenager, saw a peaceful protester arrested by police on the streets of New York City during a demonstration protesting apartheid in South Africa.

Viola’s work experience has also included helping to supply the information needs of researchers, fundraisers and executive staff in both the profit and non-profit world.

Church and religious thought have always played a large role in her life, and she ultimately found a spiritual home in Unitarian Universalism in 2002. Viola is currently a member of the Unitarian Universalist Society of Schenectady, in New York, as well as the Church of the Larger Fellowship. Over the years, she has served in various voluntary and paid positions in congregations in the Hudson-Mohawk cluster of UU congregations in New York State, and she has had the honor to preach at congregations in Vermont, Massachusetts, Connecticut, Ohio and New York. Viola sat on the board of Unirondack, a Unitarian Universalist camp and conference center located in the Adirondack Mountains of New York, from 2014 to 2019, contributed to the liturgical materials for the Promise and the Practice of Our Faith Campaign in 2018, and was a member of the President Search Team for Meadville Lombard Theological School. She is currently a member of the Journey Toward Wholeness Transformation Committee of the Unitarian Universalist Association and the board of UU Wellspring.

In her spare time, Viola likes to be in nature, and is especially fond of the beach. She enjoys music and dance of all kinds, biographical books and science fiction movies. She also likes to think of herself as an amateur photographer.

Viola was awarded a B.A. in economics from the State University of New York at Binghamton, an M.S. in information science from Long Island University, a J.D. from the Fordham University School of Law, and an M.Div. from Meadville Lombard Theological School.

She has one adult son Taylor, a classical musician who will be attending Juilliard in the fall, and a rescue cat named Minerva.

Click here for her video Easter greeting for our CVUU congregation: https://youtu.be/zbTiG-BsbUk