Sunday Services ONLINE AT 10:30am 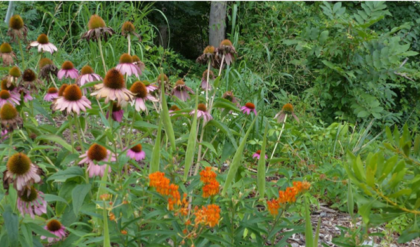 Our congregation has accomplished a mighty feat this year, making stellar progress in restoring the Elizabeth River which surrounds our church home.

That progress will be officially recognized at the Elizabeth River Project’s virtual awards ceremony Jan. 21, where CVUU will be awarded a Two-star Achievement Level status as a River Star Business.

According to Pam Boatwright, River Star Business Programs Manager, Two-star Achievement Level recognition is attained when a River Star documents significant results in both pollution prevention and wildlife habitat enhancement. Efforts must be clearly quantified and achieved with meaningful employee involvement and be significant relative to the size and nature of the organization.

“You can be very proud of this significant recognition,” she said.

There are more than 5,000 businesses and homes taking part in similar restoration efforts through the River Star program. And the group conservation effort is seeing results. The Elizabeth River, once known as one of the most polluted rivers on the Chesapeake Bay, is making a miraculous recovery. Ecologists have seen the return of sea horses and river otters. And, in 2019, the program reduced sediment pollution into the river by 109,220 lbs., nitrogen by 78.3 lbs., and phosphorous by 24.4 lbs.!  These meaningful results were achieved through both homeowner and business best-management projects like rain barrels and living shorelines, according to their website.

CVUU, like the other River Star partners,  pledged to  “restore the Elizabeth River to the highest practical level of environmental quality” by making good on seven promises outlined by the non-profit, including not feeding geese and “only rain in the storm drain.”

This achievement would not have been possible without the support of our members and the heavy lifting of three CVUU committees – Environmental Initiative, Grounds, and Landscape.  They coordinated their efforts with our CVUU Board and worked tirelessly, throughout

the building-shutdown months since March. So many people answered the call, including a handful of intrepid souls who watered during a sudden summer drought to ensure everything survived.

CVUU’s total work party hours for the past planting year totaled 550 hours, including 43 participants over 13 months.  We received grants totaling $3,000, of which we have spent $2,307.

While we accomplished the biggest changes over the past year, the real start was in 2016 when our building was purchased. CVUU occupies nine acres, four of which are wetlands. In May of 2016, the Chesapeake Bay Preservation Area Board provided guidance on how to restore the riparian buffer which extends on three sides of the building. Further environmental recommendations came from the Elizabeth River Project in June of 2018, and from Lynnhaven River Now in June of 2019. Our CVUU Grounds Committee Chair, Barbara Gelzer, said emergency repairs to our parking lot provided an immediate impetus; we had to cut five feet off the western edge to replace the failing curbing. The repairs exposed over 800 square feet of soil which had previously been under the paving. Our Environmental Initiative sub-committee provided $1,000 for needed shrubs and grasses. Planting started right away to stabilize this area and avoid an explosion of invasive growth. The planting was completed early this summer and reported to the Elizabeth River Project, whose recommendations from their June 2018 letter had been carefully followed.

Just as the last shrubs were planted, the Elizabeth River Project awarded CVUU a tree grant. So, planting resumed, pushing through the summer to meet the grant deadline.  Luckily, we were given a needed extension on the grant completion date as well as an additional grant of $1,000.

Barbara Gelzer credits CVUU’s tremendous teamwork with the bulk of our success. “Over and over during this time, members of CVUU answered the call and turned out for work parties.  Not just a dedicated team, not just grounds crew, not just a committee or two achieved this accomplishment.  We all did, working together,” she said.

Being good stewards of the environment is just one of many goals for CVUU, which has a rich history as an agent for change in our community. CVUU is also a member of the Pearl Faith Community, a similar pledge-program of the Lynnhaven River Now non-profit, whose goal is to help people of faith recognize and fulfill their responsibility for the stewardship and protection of waterways in Hampton Roads.

For homeowners or businesses located along this vital waterway, you can read more about how you can be a River Star partner on their website here: https://elizabethriver.org/