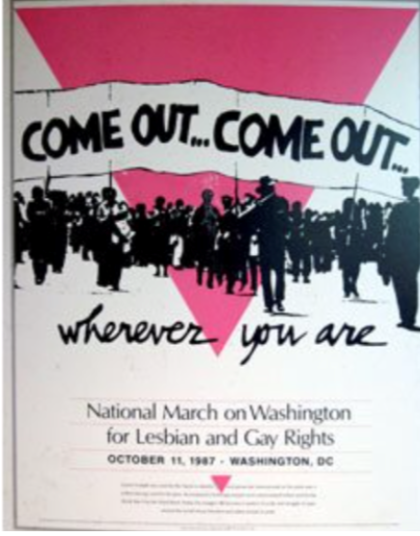 Years ago, Dale and I were on a vacation in Provincetown on Cape Cod, and we went to see a show called Ten Percent Revue, a clever musical send-up of gay life in the 1980s, full of songs about dating, about being closeted, about losing loved ones to HIV/AIDS.  It was a powerful show that has stayed with me these 30+ years. At the end of the show came a charge to the audience, to attend a rally in Washington, DC on October 11, 1987 – the first ever “Coming Out Day.” We went. Because of an ill-considered decision to fly down and back to DC the same day, we missed a lot of the actual rally and speakers, but we were there.  We showed up.

We saw that we were not alone, that collective action was possible, and that we had support in the straight community.  Jesse Jackson spoke along with famous singers and actors – many straight, some gay, some perhaps closeted but willing to take a stand for the civil rights of lesbians and gays.  I’m looking at the poster right now, framed and in my living room – “National March on Washington for Lesbian and Gay Rights” – an extraordinary event. And yet…. There is no mention of bisexual people, no mention of transgender people, or folks who do not identify as either male OR female.  Certainly, there have always been folks across the spectra of sexual orientation and gender identity, but we didn’t talk about it then. In those times, the B and T were silent in the call for LGBT rights.

But now we are learning more, that just as I knew at a very young age that I was lesbian (even before I knew such a word existed), there are people all over the world who know that they do not conform to traditional definitions of gender.  For those of us who are cis-gender (that is our outward expression of our gender is consistent with how we feel on the inside) it is hard to imagine feeling otherwise, just as I imagine it has been hard for straight people to understand how it might feel to be In love with a person of the same sex.  Things that are outside of our own experience are, by definition, hard to understand. And yet, my friends, we are called to stretch beyond our own experience, our own knowing, in order to welcome truly and fully those whose identities and expressions might not match our own. This is how we build and nurture and sustain a loving and open community of faith.  Today, even beyond the need to open our hearts to each other, we are called to act for justice, to show up.

This week, the United States Supreme Court is taking up two important cases in the area of civil rights for LGBTQ people – one case on behalf of two gay men fired for being gay and the other on behalf of a transgender woman, fired because she intended to continue working after transitioning to her female self.  The Court will decide if LGBTQ people have legal protection against discrimination in employment. I am praying that the Justices will find wisdom and courage to rule on the side of justice. Please join me in that prayer and stay tuned for what further action may be asked of us. This Sunday in worship we will explore and honor the experiences of transgender people.  Come, Come, Whoever you are. You are welcome here.